This article was previously published June 21, 2020, and has been updated with new information.

Here, I interview three vitamin D experts about the importance of vitamin D for improving your immune function and resistance to viral infections of all kinds, including COVID-19.

Carole Baggerly is the director and founder of GrassrootsHealth Nutrient Research Institute, a nonprofit public health research organization dedicated to moving public health messages regarding vitamin D from research into practice. Baggerly received our Game Changer Award in 2018. She started her work in vitamin D after treatment for breast cancer in 2005.

GrassrootsHealth conducted a review of an observational study involving 212 patients in Southeast Asia who had COVID-19, identifying a correlation between vitamin D levels and disease severity. Those with the mildest disease had the highest vitamin D levels, and vice versa.

Now, it’s worth noting that the “optimal” vitamin D level in that study was set at 30 nanograms per milliliter (30 ng/mL), which may actually be suboptimal. According to the research done by GrassrootsHealth, 40 ng/mL is the lower edge of optimal, with 60 ng/mL to 80 ng/mL being ideal for health and disease prevention. Despite that, the benefit of having a vitamin D level above 30 ng/mL was clear. 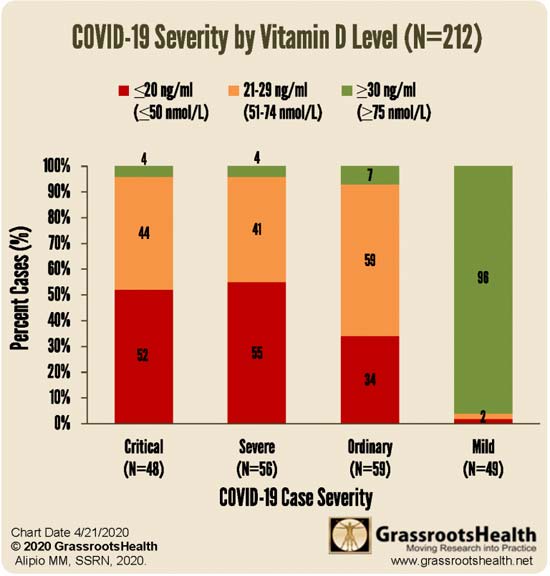 A second study looked at the data from 780 hospital patients in Indonesia. The same vitamin D level cutoffs were used in this study: below 20 ng/mL; between 20 ng/mL and 30 ng/mL; and above 30 ng/mL.

It’s Your Vitamin D Blood Level That Matters, Not the Dose

Now, many vitamin D studies conclude that vitamin D supplementation has little or no effect on any given health problem or condition. But there’s a very simple reason for this: Virtually every one of these studies use the same dosage or dosages for everyone, and do not measure participants’ blood levels.

This is a crucial mistake, as it’s really the blood level that needs to get over a particular threshold, and the dosage required to get there can vary widely. Another problem is the fact that most studies use far too low a dosage. If the dosage is too low, you cannot get your blood level into the protective range, and thus it will appear as though vitamin D is useless.

A third factor that can influence the outcome of vitamin D studies is the interaction between vitamin D and other nutrients. Competing deficiencies can affect a particular sub cohort or population, thereby obfuscating results.

A fourth factor is how you define deficiency — using a “word” versus a serum level. For the GrassrootsHealth Scientists’ Panel of 48 researchers, the consensus is that minimum serum level should be 40 ng/ml (100 nmol/L). Wagner explains:

“If you do a PubMed search, you see literally thousands of articles. You see this really rich basic science information that’s been accumulating in the last two decades, that strongly supports vitamin D’s role in immunity.

But then, when randomized control trials are done, there are some that suggest vitamin D is effective and others say no. It’s been a contentious issue and I’m sure Bruce and Carole [Baggerly] will agree with me that doing nutrients studies is not the same as doing a pharma study where … they start with zero as their baseline.

[When it comes to] vitamin D [levels], everybody is different. And so, using a biomarker, which is what we use in our studies, total circulating 25(OH)D is a much better indicator.”

“In nutrient studies with vitamin D, it’s always been the dosage — how much you’re going to give — with no concern about what the attained blood levels would be.

In our studies, of course, we always measure blood levels. Those studies that Carol [Wagner] and I carried out in pregnancy (in 2003), they were monitored by the FDA. We had to get an investigational drug number (IDN) to run these studies, and it was unheard of to have to do that …

In the end, we proved the [dosage] we [gave] — 4,000 units — was totally harmless as far as dosing went. But it’s still a fight … We have yet to see one adverse event due to vitamin D in any of the studies that Carol [Wagner] and I have carried out, not a single one …”

Unfortunately, with labeling laws the way they are, it’s very difficult to get this point across. As noted by Baggerly:

“GrassrootsHealth … [asked] the FDA … for the ability to be able to print on the [label of] any vitamin D supplement that ‘[Vitamin D] may help have a healthy pregnancy and [improve] birth outcomes.’ What we were told in that meeting by the FDA person was, ‘According to what dose?’

We explained repeatedly that it wasn’t a dose, it was a serum level, and the FDA person in charge said, ‘By law, we can only accept recommendations based on dose, and if you can’t provide us with a dose, we cannot accept any recommendation.’ So, the laws are out of date, to say the least.”

The color of your skin has correlations to your vitamin D level, and we’re also seeing racial disparities in COVID-19. As noted by Hollis, in Detroit, Michigan, where African-Americans account for 14% of the population, they accounted for 40% of COVID-19 deaths.1

“It was even worse in Sweden where the Somali population is less than 1%, and they [account for] 40% of the deaths,” Hollis says. “In Britain, of the 24 health care physicians who have died, 23 were people of color. It was so bad that they pulled those people off the front lines … the physicians and the nurses.”

Vitamin D deficiency likely plays a role in this racial disparity, although nutrition, obesity and diabetes rates also contribute to immune dysfunction. It’s important for people with darker skin to realize that the more melanin you have, the more sun exposure you require to make sufficient amounts of vitamin D.

According to Hollis, it’s physiologically impossible for a dark-skinned individual in the United States, unless they’re in Southern Florida or Hawaii, to get optimal vitamin D from typical sun exposure.

If for whatever reason you cannot get regular sun exposure, then vitamin D supplementation is advisable. Ideally, you’ll want to take it daily, opposed to taking a large bolus dose once a week or once a month. As noted by Hollis, studies have consistently shown only daily supplementation were effective.

“The vitamin D component produced in the skin as a result of sun exposure is at one stage what we take as a supplement, the D3, and that then is metabolized into 25(OH)D, which is what we’re measuring, for the most part.

The D3 and even the 25(OH)D have been considered in times past … as not being active … In recent studies, and we really are talking relatively recent, the D3 itself seems to be active in helping keep the epithelia strong [to prevent endothelial leakage].”

Vitamin D3’s ability to strengthen the endothelial structure of the lungs may be one way in which vitamin D helps protect against COVID-19. “COVID-19 attacks the lungs … and vitamin D in this model showed to stabilize that,” Hollis says.

All of these need to be in balance, Wagner explains. If an imbalance occurs, you can end up with a cytokine storm. According to Wagner, vitamin D is very effective for regulating and balancing adaptive immunity. One example demonstrating the elegance of this system is pregnancy. Wagner explains:

“You go from a very active immune system where you have, as the egg is fertilized, an invasion into the uterine wall. You have to allow for that, [and] it’s a very pro-inflammatory state. Then, in order to allow fetal growth, you have to have quiescence of that [proinflammatory state].

You see shifts in the T cell populations, the phenotypes, as well as in the monocyte macrophage population, their activity. And then, at the time of delivery, you shift back to a proinflammatory state [when you] go into labor and have expulsion of the fetus and the placenta. So, it’s a tremendously elegant process.

We know that when it’s deranged, we get such conditions as preeclampsia. You get a vasculitis throughout the body and it can lead to death of both the mother and the fetus, and you have a cytokine storm during that. So COVID-19 is not like a foreign alien; it’s utilizing the very immune system that we have in our body and it makes sense.

Even though this particular virus is new, it’s incorporating systems within our body that are ancient and that includes a very ancient pre-pro hormone, which is vitamin D.

So, it makes sense to me, as a physician and as a scientist, that those individuals who have balance in their bodies, and in this case vitamin D balance, they’re going to do better than if they had deficiency [because then] they can’t mobilize those [immune] cells. Those cells are going to be dysfunctional.”

Research has also demonstrated that pregnant women with optimal vitamin D levels significantly reduce their child’s risk of developing Type 1 diabetes, which is an autoimmune disorder. As noted by Baggerly:

“We’re working with the Diabetes Research Center to see whether, even after the child is born, as long as they don’t have full-blown type 1 diabetes, what can we do to help stop it? And it turns out that the combination of vitamin D and omega-3 really matters.”