Three Supplements That Can Lower Your Risk for CVD

In recent years, research has suggested trimethylamine-N-oxide (TMAO) might be a therapeutic target for insulin resistance and gastrointestinal (GI) cancers. As noted in one 2017 scientific review:1

“Through the digestion of animal protein and other constituents of animal products, the commensal bacteria in the gut (the gut microbiota) forms metabolites that can contribute to the development of both insulin resistance and cancer.

Trimethylamine-N-oxide (TMAO) is such a molecule and has recently drawn a lot of attention as it may be a risk factor for — and a link between — the gut microbiota and cardiovascular and renal disease.

Further, TMAO is anticipated to have significance as a biomarker of — or even an independent risk factor for — other undesirable conditions, including insulin resistance … TMAO originates from a precursor, trimethylamine (TMA) that is a metabolite of various precursors; mainly choline and carnitine from ingested foods.”

In a paper2 led by James DiNicolantonio, Pharm.D., who is also the coauthor of my book, “Superfuel: Ketogenic Keys to Unlock the Secrets of Good Fats, Bad Fats, and Great Health,” we show how the likely true cause of elevated TMAO levels — which is associated with an increased risk of cardiovascular disease (CVD) — is hepatic insulin resistance.

Moreover, the paper shows that krill oil, astaxanthin, fish oil and berberine may be among some of the best supplemental strategies for those with high TMAO levels after diet optimization, as it is simply a reflection of insulin resistance in the liver.

DiNicolantonio has a book called “The Longevity Solution,” with Dr. Jason Fung, which takes a deep dive into the benefits of omega-3s, including fish and krill oil.

As noted earlier, TMAO is created when gastrointestinal bacteria metabolize dietary choline and carnitine found in eggs, liver, meat and fish, just to name a few. The bacteria turn choline and carnitine into trimethylamine, which is subsequently absorbed and oxidized to TMAO with the aid of flavin monooxygenases in your liver, primarily FMO3.

Flavin monooxygenases are a family of enzymes that oxidize xenosubstrates, thereby allowing the compounds to be excreted. Because choline and carnitine raises TMAO, which is thought to be a risk factor for CVD and Type 2 diabetes, some recommend limiting dietary and supplementary intake of these nutrients. However, DiNicolantonio and his coauthors point out there’s a significant flaw in this theory, stating:3

“[N]utritional epidemiology fails to incriminate dietary choline as a CV risk factor; supplemental carnitine is known to be highly protective in patients with vascular disease; and fish, the richest dietary source of preformed TMAO, is also protective.

Hence, TMAO, at least in the moderate concentrations seen in those without severe renal dysfunction, is not a mediating risk factor for vascular disease, but rather serves as a marker for factors that promote vascular disease and diabetes.

Impaired renal function is one of these factors, but not the sole one. The possibility that certain GI bacteria that are adept at generating trimethylamine are also harmful to vascular and metabolic health, remains undocumented. Factors that increase hepatic FMO3 therefore fall under suspicion.

Diets, nutraceuticals and medications which combat hepatic insulin resistance may therefore be useful for alleviating the health risks associated with elevated TMAO.”

Elevated TMAO — A Risk Factor for CVD and Metabolic Disease?

As noted in the featured paper, the evidence linking elevated TMAO with CVD risk is mixed. Several studies4,5,6,7 have concluded that elevated blood levels of TMAO is predictive of major adverse cardiovascular events in people preexisting heart disease, while others have failed to find support for this connection.8,9

Still, a meta-analysis10 of 11 studies published in 2018 found higher TMAO levels were associated with a 23% increased risk for cardiovascular events and a 55% increase in all-cause mortality. Animal studies cited in DiNicolantonio’s paper also suggest that very high oral doses of TMAO or its precursors, phosphatidylcholine and carnitine, can have a pro-atherogenic effect.

Case-controlled epidemiological studies have also linked high TMAO to a significantly increased risk for Type 2 diabetes and metabolic syndrome. “Indeed, the correlations between TMAO and diabetes risk appear to be stronger than those for cardiovascular risk,” DiNicolantonio writes.

That said, there’s little evidence to suggest that dietary intake of TMAO or its precursors actually promotes CVD, provided your renal function is normal. On the contrary, choline is crucial not only for your brain, nervous system and cardiovascular function but also for healthy liver function and detoxification.

In fact, it appears to be essential for the prevention of fatty liver disease and is found in high amounts in foods such as fish, which are known for their beneficial influence on CVD — in part due to the benefits of long-chain omega-3 fats. DiNicolantonio writes:11

“With respect to carnitine and CV risk, a meta-analysis12 of prospective clinical trials in patients who had recently experienced a myocardial infarction concluded that carnitine supplementation is markedly protective with respect to total mortality, ventricular arrhythmias and new-onset angina …

Moreover, rodent atherogenesis studies, in which carnitine has been administered in doses reasonably proportional to the supplementation doses used clinically, have found that carnitine is anti-atherogenic, despite its propensity to raise TMAO …

It is therefore reasonable to suspect that moderately elevated TMAO, rather than being a mediator of the associated CV risk, is a marker for factors which both promote CV events and increase plasma TMAO.”

According to DiNicolantonio, a key factor appears to be insulin resistance in the liver, which has been shown to significantly elevate TMAO. He writes:15

“TMAO arises when dietary choline and carnitine is metabolized by gastrointestinal bacteria to yield trimethylamine, which is then absorbed and oxidized to TMAO by hepatic flavin monooxygenases (FMO), primarily FMO3 … subnormal hepatic insulin activity, as found in those with hepatic [liver] insulin resistance, boosts hepatic FMO3 expression and hence TMAO levels.”

DiNicolantonio goes on to propose that elevated FMO3 activity in the liver can be a reflection of insulin resistance in the organ, which in turn influences cardiovascular health risk. This, he believes, “can rationalize the epidemiology of TMAO.” He explains:16

It is therefore straightforward to postulate that TMAO can serve as a marker for hepatic insulin resistance, and that this explains at least a portion of the risk for cardiovascular events and diabetes linked to TMAO.”

How to Reverse Insulin Resistance in Your Liver

If elevated TMAO is indeed a reflection of hepatic insulin resistance that raises your CVD risk, what can you do to correct it and lower your risk? For starters, you’d want to normalize your weight.

Two strategies that are most helpful in this regard are a cyclical ketogenic diet and intermittent fasting. For best results, they should be done together. You can learn more about these strategies in the hyperlinked articles provided. Certain supplements can also be very beneficial in the treatment of hepatic insulin resistance, including:17

• Berberine, which functions much like metformin, a commonly used medication for the treatment of diabetes. Both work, at least in part, by activating adenosine monophosphate-activated protein kinase (AMPK). Known as the “metabolic master switch,” AMPK is an enzyme that controls how energy is produced in your body and how it’s used by the cells.

By activating this enzyme, berberine and metformin helps regulate the biological activities that normalize lipid, glucose and energy imbalances. Berberine, used in Chinese medicine to treat diabetes, has also been shown to counteract hepatic insulin resistance in diabetic rodents.18,19

• Astaxanthin, a powerful carotenoid antioxidant, is a PPARalpha agonist with activity similar to that of the cholesterol-lowering drug fenofibrate. PPARalpha agonists indirectly stimulate AMPK in your liver and have been shown to alleviate hepatic insulin resistance in animals fed diets high in fat or fructose, and lower the risk of cardiovascular events in patients with metabolic syndrome.

• Krill oil is another alternative, as it contains the esterified form of astaxanthin, which increases its bioavailability, along with long-chain omega-3 fats essential for good health, including heart health. As noted in DiNicolantonio’s paper:

“Krill oil, even when compared to fish oil, suppresses hepatic steatosis in rodents. This may be due to its astaxanthin content, which is not found in fish oil.

Moreover, krill oil, but not fish oil, reduces diacylglycerol and ceramide content in the liver. The phospholipid fraction of krill oil has also been noted to reduce hepatic glucose production, unlike fish oil.

Thus, krill oil, being a source of highly bioavailable form of astaxanthin, appears to have additional advantages for reducing hepatic steatosis and hepatic insulin resistance compared to fish oil.”

In summary, while there’s some evidence to suggest elevated TMAO levels may be a risk factor for Type 2 diabetes, atherosclerosis and an increased risk for cardiovascular events, nutritional epidemiology studies have not been able to demonstrate a detrimental impact of dietary choline and carnitine, from which TMAO is synthesized.

The good news is you can improve liver function and lower your TMAO level with the help of nutritional supplements; berberine, astaxanthin and krill oil being three of the primary ones. DiNicolantonio writes:

“In conclusion, there is reason to suspect that the elevated risk for vascular events and Type 2 diabetes associated with elevated TMAO, after correction for recognized risk factors, is mediated largely by hepatic insulin resistance and the metabolic factors which induce it …

[I]f this analysis is accurate, various measures which alleviate hepatic insulin resistance — correction of visceral obesity, activation of AMPK with metformin or berberine, activation of PPARalpha with fenofibrate or astaxanthin, amplification of adiponectin production with pioglitazone or plant-based diets, and clinical strategies which boost the production or bioactivity of GLP-1 — could be expected to decrease elevated TMAO while also decreasing the risk for vascular events and diabetes associated with this risk factor. Figure 1 summarizes these relationships …

Importantly, this analysis does not exclude the possibility that TMAO might be directly pathogenic at the very elevated levels typically seen in severe kidney dysfunction. Indeed, cell culture studies suggest that TMAO can be pro-inflammatory in the plasma concentrations achieved during kidney failure. It generally is wise to minimize the consumption of nitrogenous compounds in this context.” 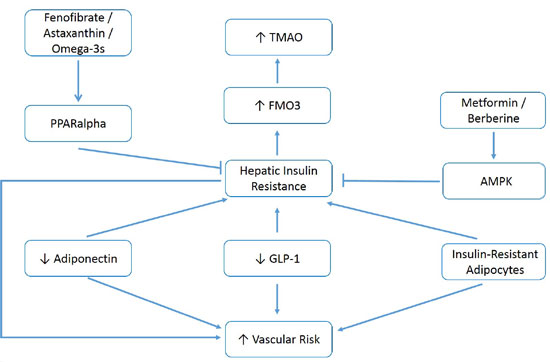 This Under-Consumed Critical Nutrient Is Key For Memory & Brain Longevity

Why You Should Upgrade to Nordic Walking