This article was previously published November 11, 2019, and has been updated with new information.

Vitamin K is a fat-soluble vitamin with significant health influence that many don’t get enough of. Your body stores very little of it, so it’s rapidly depleted without regular dietary intake. Common drugs can also deplete vitamin K, making elevated intake even more important.

There are many vitamin K-dependent proteins in your body, which are involved in things like blood coagulation, bone metabolism and mineralization of your blood vessels. As you’d suspect, that means vitamin K plays a particularly important role in the prevention of bleeding disorders, osteoporosis and heart disease.

There are two main forms of vitamin K, along with several subtypes, all of which can make matters a bit confusing. Here, I’ll do my best to break down the basics, starting with the naturally-occurring forms of vitamin K and their basic functions and sources:1,2

1. Vitamin K1 (phylloquinone) — Vitamin K1 is derived from green, leafy vegetables such as spinach, kale, broccoli and cabbage, and is best known for the role it plays in blood clotting.

With insufficient K1, your blood cannot clot properly, which can have life-threatening consequences, as you could bleed to death. Excessive intake of dietary or supplemental K1 however, can overcome the anticoagulant effects of blood thinning medications.

As noted by vitamin K expert Leon Schurgers, Ph.D., absorption of vitamin K1 from food is low; only 10% of the vitamin K found in vegetables is absorbed, and there’s no way to significantly increase that absorption.

2. Vitamin K2 (menaquinones) — The menaquinones play a primary role in bone and heart health. Inside your body, vitamin K2 is synthesized by certain bacteria in your gut. There are several subtypes of K2, two of the most common of which are:3

a. Menaquinone-4 (MK-4) — A short-chain form of vitamin K2 found in animal products such as meat, eggs, liver and dairy.4,5 Source matters, however. For example, pasteurized dairy and products from factory farmed animals are not high in MK-4 and should be avoided. Only grass fed animals (not grain fed) will develop naturally high levels.

MK-4 has a short biological half-life — about 2.5 hours — making it a poor candidate as a dietary supplement. That said, natural MK-4 from food is important for good health as it plays a role in gene expression. For example, research6 has found it may lower your risk of liver cancer.

b. Menaquinone-7 (MK-7) — Longer-chained vitamin K2 found in fermented foods such as sauerkraut, certain cheeses and natto.7 There’s a variety of these long-chain forms, but the most common one is MK-7. This is the one you’ll want to look for in supplements, as this form is extracted from real food, specifically natto,8 a fermented soy product.

MK-7 is produced by specific bacteria during the fermentation process. However, not all strains of bacteria make it,9 so not all fermented foods will provide it. Most commercial yogurts, for example, are virtually devoid of vitamin K2, and while certain types of cheeses, such as Gouda, Brie and Edam, are high in K2, others are not.

One of the best ways to ensure a good source of vitamin K2 is to ferment your own vegetables using a special starter culture with bacterial strains that produce vitamin K2. While K1 in vegetables is poorly absorbed, virtually all of the K2 in fermented foods is readily available to your body.

The MK-7 formed in the fermentation process has two major advantages: It stays in your body longer and has a longer half-life than MK-4,10 which means you can take it just once a day.

Research11 has shown MK-7 helps prevent inflammation by inhibiting proinflammatory markers that can cause autoimmune diseases like rheumatoid arthritis. And, while vitamin K1 has been found to moderately reduce the risk of bone fractures,12 MK-7 is more effective than vitamin K1 at reaching (and protecting) your bone.13,14

The difference between vitamins K1 and K2 was clearly established in The Rotterdam Study,15 published in 2004, which focused on their effects on the heart. As it turns out, K1 has no effect on the heart at all, whereas K2 does.

That doesn’t mean K1 is useless — far from it. According to a 2019 study16 in the Journal of Gerontology, older individuals with low vitamin K1 status are more likely to have mobility problems and disability than those with higher levels. In reality, you need the whole suite of vitamin K, but vitamin K2 does have important benefits that K1 does not.

One of the reasons why vitamin K2 is so important for both bone and heart health in particular has to do with a complex biochemistry involving the enzymes matrix gla-protein (MGP, found in your vascular system17), and osteocalcin, found in your bone.

“Gla” stands for glutamic acid, which binds to calcium in the cells of your arterial wall and removes it from the lining of your blood vessels. Once removed from your blood vessel lining, vitamin K2 then facilitates the integration of that calcium into your bone matrix by handing it over to osteocalcin, which in turn helps “cement” the calcium in place inside your bone.

Vitamin K2 activates these two proteins, so without it, this transfer process of calcium from your arteries to your bone cannot occur, which raises your risk of arterial calcification.18

Calcium deposits in the arteries are responsible for atherosclerosis, hardening and narrowing of the arteries, slowly blocking blood flow. It’s a common cause of heart attacks, strokes and peripheral vascular disease.

Indeed, studies19,20 have demonstrated vitamin K2 inhibits arterial calcification and improves arterial flexibility, thereby reducing your risk of a cardiovascular event (such as a heart attack) or death.21

One 2019 study22 proposed therapeutic supplementation with vitamin K2 could prevent or halt progression of vascular calcification that may occur with excessive calcium intake, and previous research has demonstrated those eating the highest amount of vitamin K2 have the lowest risk of developing cardiovascular disease.

In the Rotterdam study,23 those who had the highest amount of vitamin K2 were 52% less likely to experience severe calcification in their arteries and 57% less likely to die from heart disease over a seven- to 10-year period.

People who consumed 45 micrograms (mcg) of K2 daily lived on average seven years longer than people getting just 12 mcg per day. This was a profound discovery, because such a correlation did not exist for K1 intake.

In a subsequent trial called the Prospect Study,24 16,057 women were followed for an average of 8.1 years. Here, they found that each additional 10 mcg of K2 in the diet resulted in 9% fewer cardiac events. Again, vitamin K1 had no apparent impact on heart disease risk.

Vitamin K2 Is an Important Ally Against Osteoporosis

To explain the importance of vitamin K2 for bone health and prevention of osteoporosis a bit further, this goes back to its influence over osteocalcin.25 Osteocalcin is a protein produced by your osteoblasts (cells responsible for bone formation), and is utilized within the bone as an integral part of the bone-forming process.

However, osteocalcin must be “carboxylated” before it can be effective. Vitamin K functions as a cofactor for the enzyme that catalyzes the carboxylation of osteocalcin.

Oftentimes, osteoporosis (precipitated by insufficient calcium in your bones) goes hand in hand with heart disease, and vitamin K2’s interrelationship with MGP and osteocalcin is one of the reasons for that.

In short, both osteoporosis and heart disease are related to vitamin K2 deficiency, and can be prevented by ensuring sufficient amounts.

As noted in a 2015 paper,28 “By striking the right balance in intake of calcium and K2, it may be possible to fight osteoporosis and simultaneously prevent the calcification and stiffening of the arteries.”

The following graphic from the 2014 paper,29 “Vitamin K: An Old Vitamin in a New Perspective,” illustrates the effect of vitamin K on bone and vascular health. 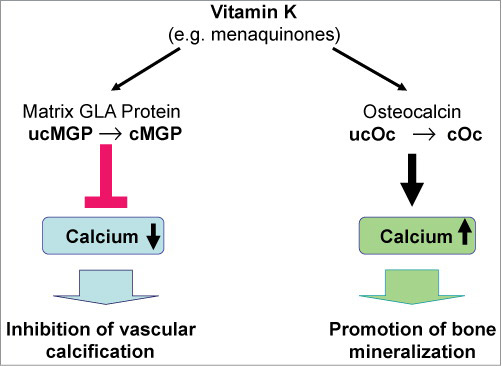 Other Health Benefits of Vitamin K2

Vitamin K2 is also important for a variety of other health reasons and conditions, including the following:

The major problem we face when it comes to optimizing vitamin K2 is that there’s no easy way to screen or test for vitamin K2 sufficiency. Vitamin K2 cannot at present be measured directly, so it’s measured through an indirect assessment of undercarboxylated osteocalcin. This test is still not commercially available, however.

Without testing, we’re left with looking at various lifestyle factors that predispose you to deficiency. As a general rule, if you have osteoporosis, heart disease or diabetes, you’re likely deficient in vitamin K2.

That said, it’s believed that the vast majority of people are in fact deficient these days and would benefit from more K2. One reason for this is because very few (Americans in particular) eat enough vitamin K2-rich foods.

So, if you do not have any of the health conditions listed, but do not regularly eat high amounts of the following foods, then your likelihood of being vitamin K2 deficient is still very high:

Use of certain drugs may also affect your vitamin K2 status and make you more prone to deficiency. For example, research55 shows statins deplete vitamin K2, and there’s scientific evidence56 suggesting statin drugs may indeed increase calcification in the arteries.

Vitamin K2 depletion may be an explanation for that. So, if you’re on a statin, you’ll want to make sure you’re taking extra vitamin K2, as well as ubiquinol or coenzyme Q10, which is also being depleted by the drug.

As discussed in “Vitamin K2 Deficiency Is a Significant Cause of Cardiovascular Disease,” warfarin, antibiotics, anti-tuberculosis drugs, anticonvulsants can also raise your risk of vitamin K deficiency.

As for a clinically useful dosage of vitamin K2, some studies — including the Rotterdam study57 — have shown as little as 45 mcg per day may be sufficient. As a general guideline, I recommend getting around 150 mcg of vitamin K2 per day.

Others recommend slightly higher amounts; upward of 180 to 200 mcg. Fortunately, you don’t need to worry about overdosing on K2, as it appears to be completely nontoxic.

If you opt for a vitamin K2 supplement, make sure it’s MK-7. (The exception is if you’re on vitamin K antagonists, i.e., drugs that reduce blood clotting by reducing the action of vitamin K. If so, you should avoid MK-7 supplements.58) Also remember to take it with fat since it’s fat-soluble and won’t be properly absorbed otherwise, and to balance it with calcium, vitamin D and magnesium.

As a last tip, keep in mind that vitamin K2 may not necessarily make you “feel better” per se. Its internal workings are such that you’re not likely to feel the difference physically.

Compliance can therefore be a problem, as people are more likely to take something that has a noticeable effect. This may not happen with vitamin K2, but that certainly does not mean it’s not doing anything.

Muscle Mass — The Key to Longevity

Another Layer of Corruption in the Opioid Scandal Revealed