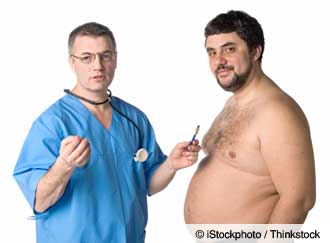 An advisory committee to the U.S. Food and Drug Administration is considering a request by the medical company Allergan to significantly lower how obese someone must be to qualify for surgery using the company’s Lap-Band device.

The FDA has already indicated that it believes people in the proposed new weight range who had the band experienced significant weight loss.

“If the agency approves the change, the number of Americans eligible for the Lap-Band operation could easily double, ensuring more sales for Allergan and probably more insurance coverage for such operations.

But the proposed change, sought at a time when the obesity epidemic in the United States seems intractable, still leaves some people uneasy, in part because of side effects and failure rates.”

About 70 percent of patients experienced those side effects, which include vomiting and pain, during a trial. A certain number of patients also simply die within 30 days of having the surgery.

Could This be the Missing Link Between Belly Fat and Heart Disease?